10 Benefits of Using a Grilling Pan 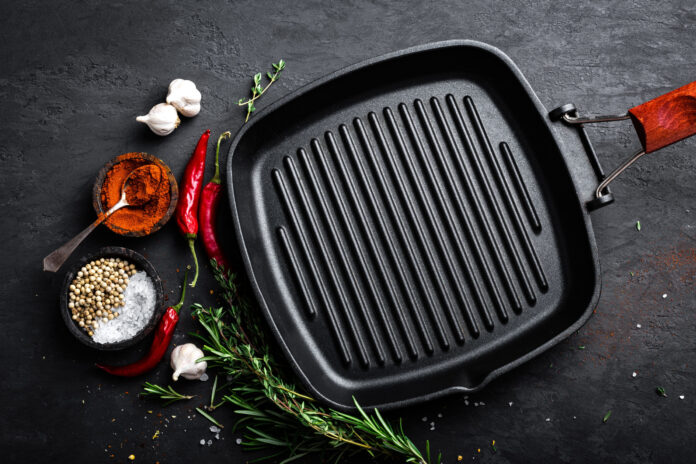 It is a frying pan with a metal grid inside or a set of parallel ridges for cooking over direct heat, and it is placed on the stovetop. So, here are ten of its benefits:

1. Not Contaminated by Any Synthetic Substances

It’s not a good idea to scratch the nonstick coating of a pan since this might cause harmful residues to be released and it may contaminate the food. Potentially harmful chemicals are released into the air by preheating a dry nonstick skillet. In these cases, a grill pan might provide a simple answer. Second, only to its durability is cast iron cookware’s lack of chemical coatings and finishes. As an alternative to nonstick cookware, it performs admirably. Also, perfluorocarbons, which are present in the pans, have been linked to several health problems, including cancer, liver damage, and congenital disabilities.

You’re unlikely to want to utilise anything requiring more upkeep between sessions. As such, a cast-iron grill pan will greatly aid here because cleaning doesn’t take much work; these pans are soap-free and may be used again.

In comparison to stainless steel, cast iron cookware is more affordable. So a skillet is a fantastic place to start if you’re looking to improve your present cookware or are curious about cast iron.

5. Food Is Your Best Source of Iron

Cast-iron cookware is well-known for its ability to impart healthy iron into meals. As such, cast iron cookware can help with iron deficiency that affects many people.

6. When It Comes to Temperature, They Can Take It a Lot

Cast iron cookware, in contrast to other cookware, can withstand extremely high temperatures. As such, cast iron may be used for cooking in the oven, on the stovetop, or over a campfire.

Cast iron makes it simple to brown food evenly and get a gorgeous sear on meats and pieces of bread. Cast iron maintains heat better than other materials, making it an easy choice for frying and browning various meals.

Cast iron cookware warms evenly and gently, preventing hot spots that are typical in nonstick and stainless steel cookware. So, there will be no more “half-burned, half-raw” mishaps in the kitchen.

9. Put It to Use Over Anything That Generates Heat

Cast iron pans are favoured by campers and those preparing for the end of the world because they are used over an open flame. Cast iron pans and the capacity to build a fire would be your best choice if your gas range or electric burners suddenly stopped working, allowing you to get back into the kitchen fast. Grill pans made of cast iron are multipurpose since they are used in the oven and on the cooktop. So you can cook at any temperature using a cast iron pan. Also, you may use it with different kinds of heat, giving you more kitchen flexibility.

10. Quickly Grills a Lot of Food Without Taking Up Too Much of Your Time

You may get this Pan in a round or square shape, and its large cooking area is perfect for barbecues. You can cook a wide variety of meats and vegetables in the same Pan without washing it numerous times so that you may create many meals in a single session regardless of your chosen method.