What do sales reps need: Training vs. Coaching? 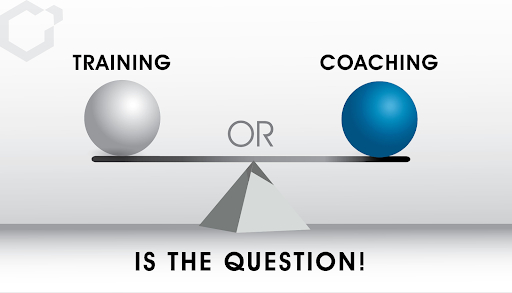 For a long time, there’s been a misconception that sales training and coaching are the same.

Are you of the same opinion?

However, when I received sales coaching, I realized the stark difference between the two.

But before I go into the nitty-gritty of sales training and coaching, let’s understand the two terms irrespective of sales.

What’s the difference between coaching and training regardless of sales?

When you teach new skills or present new knowledge to a group of similar professionals, it’s counted in training.

Coaching comes into the picture when an existing skillset needs sharpening and application is unclear or lacks quality. Coaching can help develop a person or their performance on the same skillset.

Now that you understand the fundamental concept of training and coaching, we can move on to the sales side of things.

This article will highlight the core differences and help you understand the importance of one over the other, or maybe not. Let’s see about that.

So, let’s get the facts straight with a quick comparison table-

Sales training Vs. Sales coaching- Which one is more important?

Did you know 84% of sales training is forgotten in the first three months?

Isn’t that the case with all of us?

Training is instrumental in the beginning, but without continuous reinforcement, the teaching can fade off quickly.

Earlier, coaching was optional, and most organizations ignored it. With sales now becoming a strategic game, more companies are investing in coaching their team members to create a smart sales team replacing a hard-working one.

Sebastien Van Heyningen, President – Revenue Operations Consultant, began his career as a sales development rep in an early-stage start-up where he had unconventional training and coaching experiences.

I’ve had tons of advisors, colleagues, and people in my network who helped me personally, and my formal training is a little lacking, yet I was able to build a GREAT career in sales.

Nevertheless, the above perspective is suitable for small and mid-sized companies. What about large companies?

We cannot dismiss the importance of training in large enterprise organizations despite the emergence of sales coaching.

As a result, both sales coaching and sales training are valuable in a sales environment, and both are proactive approaches if conducted in a structured manner.

Also Read: The difference between branding and direct marketing

What would you choose?

“A coach helps you find the answers on your own.” – says Jacco Van Der Kooij, Founder & CEO at Winning by design. Moreover, he says it’s time to move from training to coaching if you are looking to build a competent and smart sales team.

Evidently, the ever-green debate between coaching and training can go on forever. The never-ending discussion doesn’t need attention, but the right balance between training and formalized coaching does.

Your company may follow both sales teaching methods, but eventually, you’ll have to prioritize one over the other based on your company’s situation?

So, what would it be Sales training or Sales coaching?