THE NEXT BIG CHANGE IN GAME 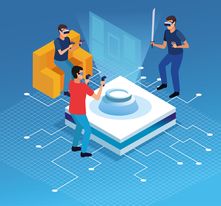 The phrase “metaverse” refers to a virtual world where people can socialise, play, and work. The term gained traction on October 29, 2021, when Facebook relaunched as “Meta” and aired a video in which CEO Mark Zuckerberg proclaimed, “I believe the metaverse is the next chapter for the internet.”

It refers to the various interconnected virtual worlds where people can learn, work, play, and socialise while using digital gadgets in broad terms.

The Metaverse is distinct in that it has no audience size restrictions and spans several interconnected mediums as well as the digital and physical worlds (such as AR, augmented reality).

In the same way that the early Internet of the 1990s and 2000s was built on and expanded by the mobile Internet (Web 2.0), the Metaverse may be considered the next stage after the Internet (Web 1.0). This huge network of virtual worlds has its own economy, with its own digital currencies, relationships, and payment systems.

The Metaverse will be home to Banger Games’ cutting-edge IoG (Internet of Gaming) network, which will link and reward all types of players for achieving goals and contributing to the ecosystem’s growth.

Digital assets like Bomb coin, Banger Games’ virtual currency, can be transferred between platforms thanks to the Metaverse’s infinite interconnectivity, Individuals and major organisations can produce decentralised content and experiences, providing players the ultimate creative economy.

The games are always evolving. The gaming business is fueled by the widespread availability of free game apps. While games like Roblox and Fortnite are credited with popularising the concept of the Metaverse among gamers, its impact will be felt by anyone, not just a select few.

Because of the integration of E Commerce and the emergence of Non-Fungible Tokens (NFTs) and other collectibles in the Metaverse, people will be able to interact with and support their favourite heroes and players in new ways.

Obviously, the technology and tweaks required to make games more “Metaverse-compliant” must still be developed. Industry analysts, on the other hand, feel we are on the verge of doing so.

The gaming industry was one of the few to be spared from the pandemic. While other businesses faltered owing to a lack of funds during the quarantine, gaming thrived. People began to spend their time gaming in order to escape feeling lonely.

They learned about the metaverse’s cosmos for the first time here. Gamers may blend the real and virtual worlds with virtual reality and augmented reality. Metaverse has helped eSports flourish by offering virtual reality sports training, competition, and a post-game locker room.

These days, the gaming industry is expanding, and there are a myriad of best free games to choose from. Finally, we’ve identified the Metaverse as having the greatest impact on the game industry. As a result, the whole gaming experience will be affected.

The virtual and real worlds are merging with the help of the metaverse. It has the ability to overcome the difficulties that people face on a daily basis. It is undeniably the next big thing in technology, and it is only getting started.

It has a big impact on how people use it and how their lives are affected by it. In reality, the metaverse will follow in the footsteps of previous inventions, with some people using it for good and others using it for illegal purposes.

Jayden J is a technical article writer with a lot of passion. He’s been writing for the past five years. He is constantly coming up with novel ideas and tech-related material that is both distinctive and informative. Jayden’s work includes video games, cyber security, web development, and a variety of other topics. Jayden provided in-depth information on what is happening in the technological world of the space era.